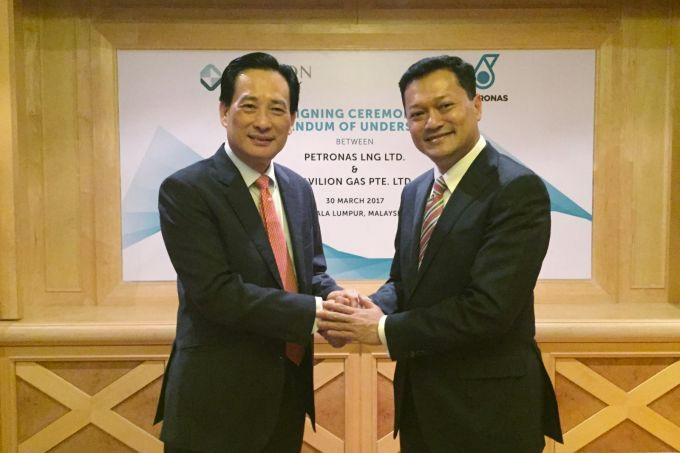 Under a memorandum of understanding (MOU) signed on Thursday evening, both the companies will also look to collaborate on LNG spot trading and cargo swaps. In the latter, this potentially includes Pavilion Energy sending a cargo to Petronas's receiving terminal in Malacca or elsewhere, and receiving a cargo from Petronas elsewhere.

The Business Times understands that the MOU includes storage and reloading facilities at terminals that each other has access to.

Singapore currently imports piped natural gas from Indonesia and Malaysia, with almost one-third of such imports coming from its northern neighbour, according to data from research organisation Bloomberg New Energy Finance (BNEF).

Some 95 per cent of the country's electricity is generated from natural gas. While most of this is piped gas, Singapore has moved to increase its use of LNG to enhance its energy security.

Singapore's piped natural gas from Malaysia is now brought in by two companies.

Keppel Corporation, through its wholly owned subsidiary Keppel Gas, imports about 1.73 billion cubic metres (bcm) each year under two different agreements inked with Petronas which end in 2022 and 2024. Senoko Energy imports another 1.26 bcm annually in a deal which will end next year, according to BNEF data.

Petronas executive vice-president and CEO of upstream operations Mohd Anuar Tib said in a statement: "Petronas' strong presence in the integrated LNG value chain and diversified LNG portfolio, together with Pavilion Energy's position as one of the LNG importers in Singapore, will allow both companies to leverage each other's strengths to create value and growth in the region."